Each year, the String Orchestra of the Rockies provides a young string musician studying at the University of Montana with a $1,000 talent scholarship. Scholarship recipients are selected from a very competitive pool of applicants, all of whom are string students pursuing an undergraduate degree at the University of Montana. In addition to having outstanding teacher recommendations and a strong academic record, individuals applying for the SOR scholarship must also audition and demonstrate their proficiency with their instrument. Students can receive the SOR scholarship multiple times during their undergraduate studies. SOR is very proud to support aspiring string performers in this way, and we are very pleased to introduce you to this year’s exceptional SOR scholarship recipient. 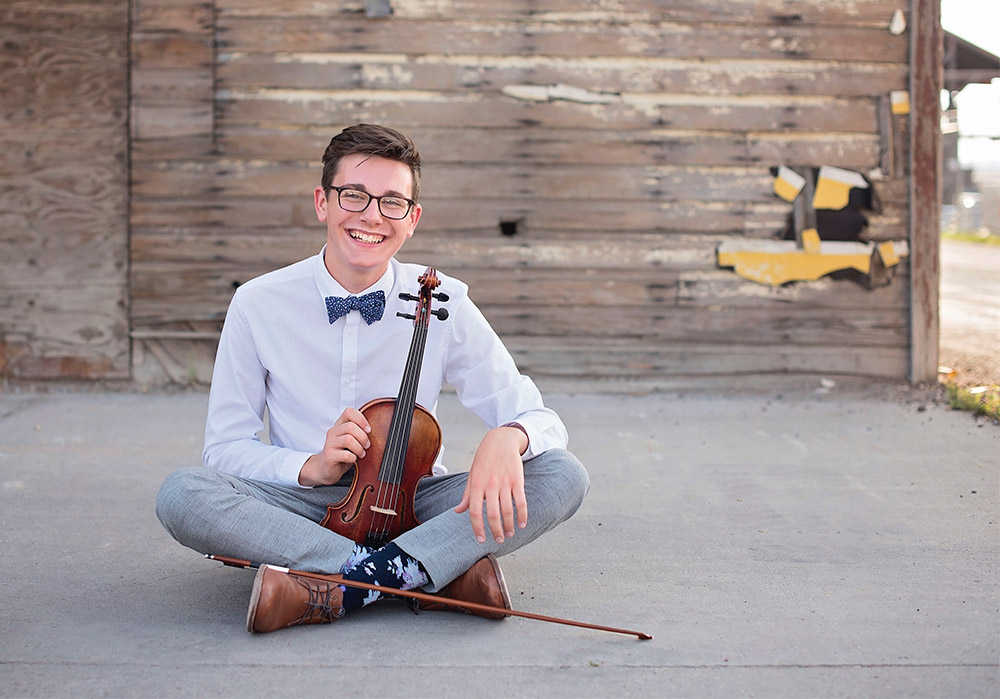 The SOR’s 2019/20 University of Montana Talent Scholarship recipient is violinist Taylor Curry from Great Falls, Montana.  Taylor has been playing the violin for eight years and studied privately with SOR violinist Mary Papoulis for the past seven. Throughout middle school and high school, he participated in numerous orchestra camps and classes and was selected as a member of the Montana All-State Honors Orchestra for three years. Taylor has performed with the Great Falls Youth Orchestra for six years, including a seat as Concertmaster. Additionally, he has had the opportunity to play with the Great Falls Symphony as an alternate musician in many concerts. Taylor states, “I greatly appreciate receiving the SOR scholarship and extend my gratitude for their support as I begin my studies at the University of Montana this fall.” 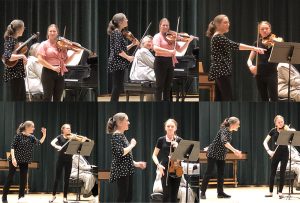 Before her turn leading Missoula’s String Orchestra of the Rockies on Sunday through its final concert of the season, violinist Jorja Fleezanis took some time to teach. “Jorja has ties to Missoula,” UM Professor and SOR member Margaret Baldridge said. Fleezanis added from her seat: “From way back!” Fleezanis used to visit to play in trios in Missoula and has had relationships with members of the String Orchestra of the Rockies for years. She served as concertmaster of the Minnesota Orchestra for two decades, before her current job teaching Orchestra Studies and violin at Indiana University. Artistic Director Maria Larionoff called her a “mentor,” in a recent interview with the Missoulian, and cited Fleezanis as a trailblazer for female violinists. Fleezanis arrived in Missoula early to mentor some additional violinists during a public masterclass held at the UM Music Recital Hall. Kelaiah Horat played César Franck’s Sonata in A Major for Violin and Piano, and led a quartet for Beethoven’s String Quartet in C minor, Op. 18. Gabe Kantor and William Cook filled out the players, performing Vittorio Monti’s “Czárdás” and Arvo Pärt’s “Fratres,” respectively. Larionoff had said of Fleezanis, “she’s really a take-charge person … I’m expecting her to just lead us,” and lead she did, during her individual lessons onstage in front of an audience scattered across the hall. After Horat finished her first piece, Fleezanis bounded onstage to begin instructing, animatedly snapping with the beat and insisting phrases be repeated until correct, like one passage where Horat’s bow work wasn’t creating the correct volume. “Alright, so you went for poundage-per-square-inch,” Fleezanis said after Horat gave a particularly strong rendition. “That’s a common misconception.” It is possible, she said, to play loud, without being overpowering. After Horat’s mastery of the section, Fleezanis praised her. “I love that, you know why I love that?” she said. “The sound is ringing on the end of each note.” The last violinist, William Cook, was taught the opposite lesson. His rendition of “Fratres,” an ambient, somewhat experimental piece included phrasing that was too loud, Fleezanis thought. She asked Cook to start at the beginning again and build up a series of arpeggios from pin-drop quiet to rollicking. The audience clapped at his improved recitation, bringing a smile to Cook’s face. Fleezanis tuned her instruction from student to student, patiently joking with Gabe Kantor, while not mincing words with the quartet led by Horat. “Without a thumb, we’ve got nothing,” she told Kantor, while asking him to adjust his finger position. “You’ve got a great thumb, there’s a lot of meat there.” Fleezanis cracked herself up with that one. But, to the quartet later, she asked for repetition of a phrase and they awkwardly started off time. “OK, what are you doing?” Fleezanis asked. “You’ve gotta look up,” she told them. “This is a human experience. You’re playing together.”
Menu